Sir Plus received this card from David Gunn and would like to say thanks for making us smile.
Unfortunately our boxers don't yet light up, but we're working on it.. 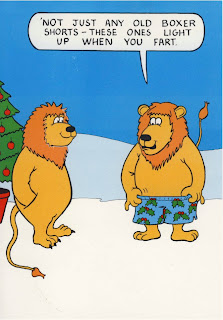 A couple of months ago Sir Plus was selling at Spitalfields market. A young gentleman walked past who looked like he had taste. "Would you like to see my underwear?" the man was asked.
It turns out that said Gent was the editor of a quirky magazine called Disorder. He liked our boxers so much that not only did he buy some, he decided to do an article on Sir Plus.

A few weeks later a charming young lady called Rebecca Karen Haywood was in touch about meeting to do the feature. We're really excited about the result, which can be seen by clicking the bellow link: